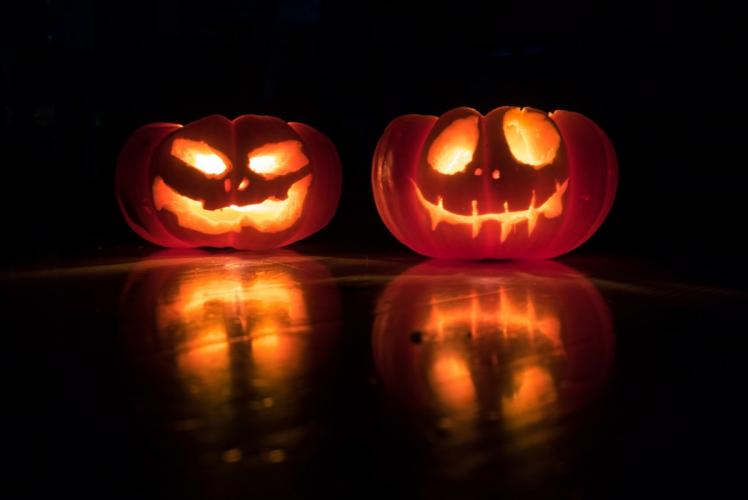 The night is dark, the wind is roaring and tree branches are tapping against your bedroom window. What else do you need besides a bowl of sweets and a blanket? A great spooooooky horror story...
We’ve put together a list for your reading terror:

Paul Sheldon is a bestselling novelist who has finally met his number one fan. Her name is Annie Wilkes, and she is more than a rabid reader—she is Paul’s nurse, tending his shattered body after an automobile accident. But she is also furious that the author has killed off her favorite character in his latest book. Annie becomes his captor, keeping him prisoner in her isolated house.
Annie wants Paul to write a book that brings Misery back to life—just for her. She has a lot of ways to spur him on. One is a needle. Another is an axe. And if they don’t work, she can get really nasty.
Reserve Misery

Haunted is a novel made up of stories: twenty-three of the most horrifying, hilarious, mind-blowing, stomach-churning tales you'll ever encounter. They are told by the people who have all answered an ad headlined 'Artists Retreat: Abandon your life for three months'. They are led to believe that here they will leave behind all the distractions of 'real life' that are keeping them from creating the masterpiece that is in them. But 'here' turns out to be a cavernous and ornate old theatre where they are utterly isolated from the outside world - and where heat and power and, most importantly, food are in increasingly short supply.
Reserve Haunted

This classic of horror writing is composed of diary entries, letters and newspaper clippings that piece together the depraved story of the ultimate predator. A young lawyer on an assignment finds himself imprisoned in a Transylvanian castle by his mysterious host. Back at home his fiancée and friends are menaced by a malevolent force which seems intent on imposing suffering and destruction. Can the devil really have arrived on England's shores? And what is it that he hungers for so desperately?
Reserve Dracula

Patrick Bateman is twenty-six and he works on Wall Street, he is handsome, sophisticated, charming and intelligent. He is also a psychopath. Taking us to head-on collision with America's greatest dream—and its worst nightmare—American Psycho is bleak, bitter, black comedy about a world we all recognise but do not wish to confront.
Reserve American Psycho

At once a Gothic thriller, a passionate romance, and a cautionary tale about the dangers of science, Frankenstein tells the story of committed science student Victor Frankenstein. Obsessed with discovering the cause of generation and life and bestowing animation upon lifeless matter, Frankenstein assembles a human being from stolen body parts but; upon bringing it to life, he recoils in horror at the creature's hideousness. Tormented by isolation and loneliness, the once-innocent creature turns to evil and unleashes a campaign of murderous revenge against his creator, Frankenstein.
Reserve Frankenstein

Something is out there, something terrifying that must not be seen. One glimpse of it, and a person is driven to deadly violence. No one knows what it is or where it came from.
Five years after it began, a handful of scattered survivors remains, including Malorie and her two young children. Living in an abandoned house near the river, she has dreamed of fleeing to a place where they might be safe. Now that the boy and girl are four, it's time to go, but the journey ahead will be terrifying: twenty miles downriver in a rowboat—blindfolded—with nothing to rely on but her wits and the children's trained ears. One wrong choice and they will die. Something is following them all the while, but is it man, animal, or monster?
Reserve Bird Box

7. A Clockwork Orange by Anthony Burgess

A vicious fifteen-year-old droog is the central character of this 1963 classic. In Anthony Burgess's nightmare vision of the future, where criminals take over after dark, the story is told by the central character, Alex, who talks in a brutal invented slang that brilliantly renders his and his friends' social pathology. A Clockwork Orange is a frightening fable about good and evil, and the meaning of human freedom. And when the state undertakes to reform Alex to "redeem" him, the novel asks, "At what cost?"
Reserve A Clockwork Orange

8. The Haunting of Hill House by Shirley Jackson

First published in 1959, Shirley Jackson's The Haunting of Hill House has been hailed as a perfect work of unnerving terror. It is the story of four seekers who arrive at a notoriously unfriendly pile called Hill House: Dr. Montague, an occult scholar looking for solid evidence of a “haunting;' Theodora, his light-hearted assistant; Eleanor, a friendless, fragile young woman well acquainted with poltergeists; and Luke, the future heir of Hill House. At first, their stay seems destined to be merely a spooky encounter with inexplicable phenomena. But Hill House is gathering its powers—and soon it will choose one of them to make its own.
Reserve The Haunting of Hill House

9. The Strange Case of Dr Jekyll and Mr Hyde by Robert Louis Stevenson

Published as a shilling shocker, Robert Louis Stevenson's dark psychological fantasy gave birth to the idea of the split personality. The story of respectable Dr Jekyll's strange association with damnable young man Edward Hyde; the hunt through fog-bound London for a killer; and the final revelation of Hyde's true identity is a chilling exploration of humanity's basest capacity for evil.
Reserve The Strange Case of Dr Jekyll and Mr Hyde

10. The Call of Cthulhu by H.P. Lovecraft

'What has risen may sink, and what has sunk may rise...'
Mad, macabre tales of demonic spirits, hideous rites, ancient curses and alien entities lurking beneath the surface of rural New England, from the man who created the modern horror story.
Reserve The Call of Cthulhu