People of the Library: Eugene At ninety-four, Eugene Laine is one of the Library’s longest-standing members – he joined in 1943!

Still an avid reader, Eugene borrows books from the Western Community Library, or sometimes has books delivered to his home by Patrick from our Outreach Team. For the first in our new ‘People of the Library’ series, Patrick sat down with Eugene to talk about his Library memories, what the Library was like during the Occupation, and his lifelong love of reading.

Eugene: Do you want a chocolate?

Patrick: That’s very kind of you. Were these a present?

Eugene: Yes, from my family. It was my birthday.

E: Well, when I was fifteen I went to work for the gas company – learning to be a manager. I went there in January ‘43. But my mother was a widow, and we didn’t have any money. So I had to save, and I was getting paid virtually nothing because I was apprenticed. So it was probably about a year before I could have afforded to join the Library [membership of the Library was a paid subscription until the early 1980s]. I think I joined maybe at the end of ‘43, maybe ‘44.

P: Do you remember joining?

P: Do you remember how much it cost to join in those days?

E: I thought it was fifteen shillings. It could have been seventeen.

There wasn’t a children’s area in my day... I probably joined at the youngest age that I could

E: Very quiet. Also, it was full of magazines, things like The London Illustrated News, something like that. It was quite an imposing place. My memory of the Library is total quietness, and you walked down that passage, it was carpeted, so there was no sound when you walked. The reading rooms had the newspapers in them. There was no speech in there either. And I think people took umbrage if they did hear you speaking. There wasn’t a children’s area in my day. I would imagine you had to be seventeen or something to join – I never saw children. I probably joined at the youngest age that I could.

P: Do you remember what sort of books you would have borrowed?

E: Yes, it was novels. I read all of H. Rider Haggard’s books, the one who wrote King Solomon’s Mines. I read all his books, there were about forty of them. I read the lot. Then I worked my way through another author and another author. I read all the Hornblower books by C.S. Forester. I enjoyed those. So I went through one after another.

And then just after the war I wanted to read Toynbee’s Study of History. So, I read that. That took me a whole autumn or winter to read because it was about ten thousand pages, and the first page I read, I remember I had to consult the dictionary sixteen times. After that I mastered more historical English. I mean terms like ‘infralapsarian’ and ‘supralapsarian’, that sort of thing. It was tremendously interesting, but his writing was terribly abstruse. Eventually I got to be able to read it without consulting the dictionary more than once or twice a page. My vocabulary shot up!

And if I found an author I liked, I’d read virtually all those that they’d written 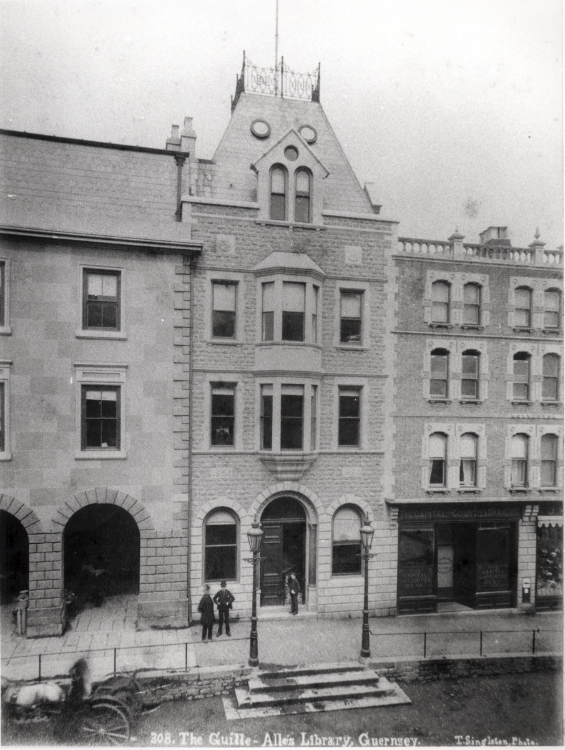 P: Do you remember what the Library was like during the war?

E: We were still able to use the Library during the occupation. That was very fortunate because there was nothing much else to do.

I mainly read two types of books. I read history books, and then after about six months I’d get fed up and read novels. And then I’d have another six months of that and then I’d get fed up of that and go back to history books. So I had a session with history and then I had a session with novels. Various kinds of novels. I was reading literary books, and then later on I went over to adventure novels.

And if I found an author I liked, I’d read virtually all those that they’d written. I used to read four a week. I’d go to Town on my bicycle – I was at the gasworks so it wasn’t far to pop into Town and borrow some books. And I’d get two books on a Saturday – I wasn’t working on a Saturday – and then on a Monday or Tuesday I’d get two more.

I remember that author – the one who wrote ‘The Devil Rides Out’ [Dennis Wheatley] – well when I read that – well I read two of his that night. I sat and started reading one of them at about 5 o’clock and I finished one by about 11 o’clock that night, and so I just dipped into ‘The Devil Rides Out’ and the next thing I knew it was 7am - I’d finished that one as well. I stayed up all the night. I was probably eighteen I would think. And I read by candlelight. We didn’t have electricity. But I did have an electric torch. And when the candles ran out, I used my electric torch. That’s probably what wrecked my eyesight!

Remember this was wartime. There was nothing do to but read. And the night I read all night long I did have a little snooze in the gas company boardroom the next day. For a couple of hours.

I’d go to Town on my bicycle... and I’d get two books on a Saturday… and then on a Monday or Tuesday I’d get two more

P: Eugene, you’re one of the longest-standing members of the Library. Do you have any advice for new members or young members about reading?

E: Not really, I mean, we’re all individuals, and I’m not going to try and tell you what you ought to read or ought to have read, and you’re not going to tell me what I should have read. Unless they are studying something specific then I think people should read what they want, what interests them. And reading can expand your interests.

Want to read some of Euguene's favourite books? H.Rider Haggard's books are still in our collection - find them on the catalogue here.