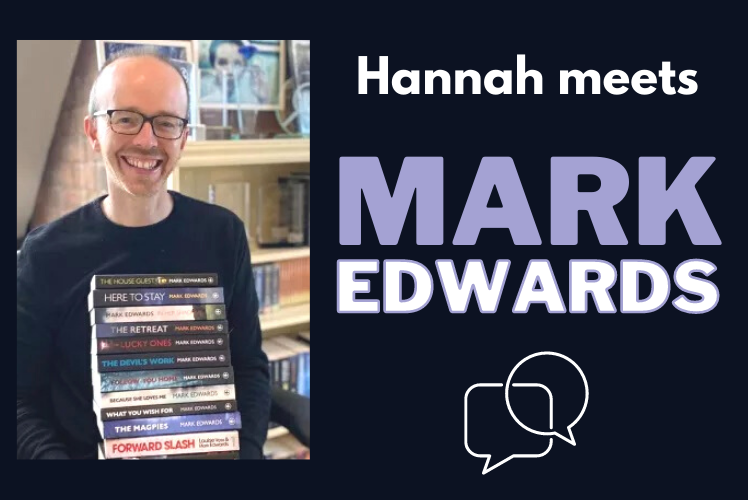 Library Assistant Hannah is passionate about reading. In this new blog series, Hannah interviews bestselling authors whose books you can find right here on the Library shelves. First up, with his fifteenth novel due for release at the end of the month, Mark Edwards chats to Hannah about the inspiration behind his new book, writing rituals, and his own favourite reads.

Hannah: Your new book is out soon; the reviews look amazing. Is it nerve-wracking releasing new work?

Mark: Yes, always! The reviews usually start appearing on Goodreads months before the book is released, and then there are the sales numbers to worry about. I’ve found it’s almost impossible to tell how well a book is going to perform until it’s out there in the world. The tricky part for an established reader is giving existing readers what they want without repeating yourself, as well as trying to attract new readers. It never gets any less stressful.

H: Can you tell us a bit about your new book, No Place to Run?

M: No Place To Run is about Aidan, a Brit living in America whose teenage sister, Scarlett, vanished when she was visiting him in Seattle. Two years after her disappearance, a woman travelling on a train is sure she sees Scarlett being chased across a forest clearing. Aidan sets out to see what he can find…

H: What inspired you to write it?

M: It’s hard to say without spoilers but I can tell you it has an eco theme, and I was inspired by the Extinction Rebellion protests and the rise of Greta Thunberg. The opening scene, in which the woman on the train sees the girl being chased through the forest, just popped into my head one day. I have no idea where it came from.

H: I know, like me, you’re a huge Stephen King fan; which is your favourite book by him?

M: Yes, I grew up reading Stephen King and he’s been a big influence on my work. My favourites are Misery and The Stand. They’re very different and I can’t choose between them.

H: Paul Sheldon in Stephen King’s Misery has a ritual after he finishes writing a book; do you have any weird rituals, or writing quirks?

M: I don’t have any rituals for when I finish a book – I don’t even type 'The End' – but I have a ritual before I start which involves going out and buying new stationery. I have to buy a new notebook for each new novel. I went through a Leuchtturm 1917 phase but have gone back to my original favourite: hardcover, spiral-bound A4 Black n Red. They are perfect. I am also very particular about the pens I use. They have to be Sharpie handwriting pens, a particular type that is hard to find in the UK so I either get American fans to send them over or pay a fortune on eBay for them. Obviously if I was stuck I would write with a biro or a blunt pencil but I am superstitious about my Sharpie pens!

H: Do you have a favourite book of your own?

M: I think the book I’m most proud of is Here To Stay. I think I succeeded in creating a set of truly love-to-hate villains in that book and pulled off a really great twist. Most of my readers say The Magpies when I ask this question, which is slightly frustrating because it was my debut! I feel the same way about that book as I imagine Radiohead feel about ‘Creep’.

H: I know you self-published some of your early work; how does that compare to publishing with a publishing house?

M: I definitely prefer being with a publisher. For a start, the editorial input is vital. I work very closely with my editors and my books would be far worse without them. (Having said that, The Magpies wasn’t professionally edited and it remains the fans’ favourite so I’m not sure what message to draw from that!) I am a bit of a control freak so there are parts of being with a publisher that can be frustrating but overall I like being part of a team and not having to do all my own marketing.

H: You seem to write your novels very fast; do you typically stick with a daily word goal?

M: I don’t feel like I write that fast… for the last few years it been one per annum. That’s a lot quicker than Donna Tartt but about average for crime writers, I think. Having said that, as I mentioned above I’m increasing my output to one every nine months and we will see how that goes! To actually answer your question, I aim for 2000 words a day.

H: Are you working on anything else, or taking a well-earned break?

M: A break? What’s that? I am contracted to write a book every nine months so I don’t have time for breaks! I’m about halfway through the next book. I also have a novella coming out later this year, called Sweetmeat, which is a companion book to The Retreat. I’m self-publishing it as a limited edition hardback as I want to create something beautiful.

Join Hannah again next month as she chats to another bestselling author! In the meantime, find Mark Edwards’ books in the Library here.