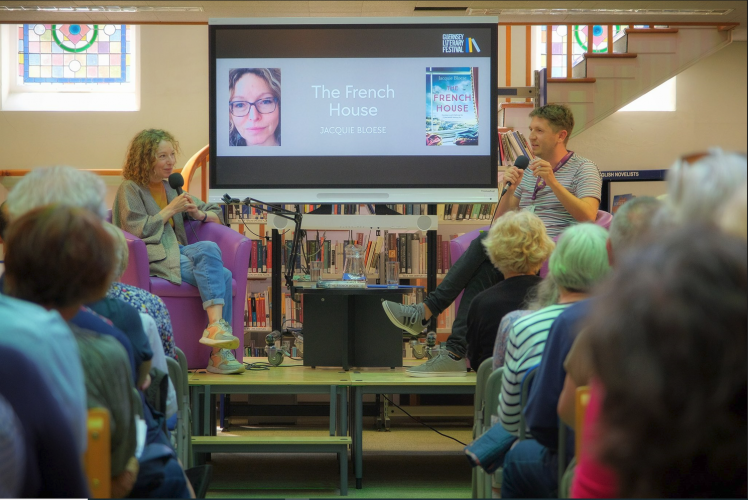 The Guernsey Literary Festival made a triumphant return this year, hosting in-person author visits for the first time since 2019.

More than 70 events took place from the middle of May until the main weekend in late June, with visiting authors including Richard Dawkins, Jack Dee, Dame Lady Hale, and Jonathan Freedland. There were no fewer than 8,000 attendees, with 5,000 at ticketed events and 3,000 as part of the Festival's extensive education programme.

At the Library we were delighted to host a record total of fourteen events, all well attended and all with fascinating speakers. We kicked off in May with a visit from superstar crime writer Elly Griffiths, who talked about her wildly popular Ruth Galloway series. The same day our Head of Marketing Adam Bayfield hosted the event with novelist Anthony Horowitz at the Princess Royal Centre for the Performing Arts, discussing his new James Bond novel and his bestselling Hawthorne series, the latest of which is set in Alderney.

On stage with Anthony Horowitz (left); Elly Griffiths signing books after a brilliant talk at the Library (right)

It was a pleasure to host a number of events with local and locally connected authors, including Jacquie Bloese - whose debut novel The French House is set on Guernsey during the German Occupation - and Ben Hinshaw, whose first novel Exactly What You Mean has received rave reviews and earned him a spot on BBC Two's books discussion show Between the Covers. Ben used to work here at the Library, so it was a real thrill for us to welcome him back on stage to talk about his book!

Other local authors to appear at the Library included Tish Delaney, Jason Monaghan, and Jenny O'Brien, while local artist Charlie Buchanan joined Edward Chaney and publisher Martin Morgan to discuss the forthcoming new illustrated edition of The Book of Ebenezer Le Page - we absolutely can't wait to see it!

The family and education events form a key part of the Festival programme, and it was great to play host to a series of free children's events at the Library. Author Jodie Lancet-Grant got everyone climbing the rigging and walking the plank as she read from her book The Pirate Mums, and Guernsey's own Huw Lewis-Jones led us all through a hilarious reworking of the Twelve Days of Christmas from his book Croc O'Clock. Meanwhile it was particularly exciting to welcome Hannah Gold to talk about her book The Last Bear, winner of the 2022 Blue Peter Award and the 2022 Waterstones Children's Book Prize.

Huw Lewis-Jones reads from one of his children's books (left); an explosive morning with Jodie Lancet-Grant and The Pirate Mums (right)

The final weekend of the Festival saw several more speakers grace the Library stage, including science fiction writer Adrian Tchaikovsky, Philip Pullen discussing Philip Larkin on the centenary of his birth, and yet another Philip, Philip Neame, talking about his new memoir on his experiences during the Falklands War.

The Festival's Honorary Chairman Terry Waite leafs through a book in the Library Board Room (left); Anthony Horowitz gets animated in conversation with our own Adam Bayfield (right)

What a few weeks it's been! For all of us at the Library, it was a pleasure and a privilege to play our part in making this year's Guernsey Literary Festival a success. Congratulations to the Festival organisers for their hard work in putting together such a fantastic programme - perhaps the biggest and most varied yet. Roll on 2023!