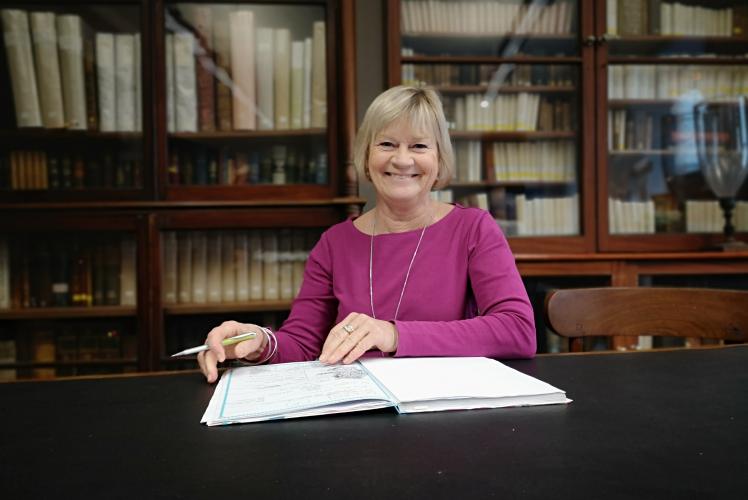 This week we’re saying goodbye to our Chief Librarian, Laura Milligan, who’s retiring after almost forty years at the Library.

Laura first joined the staff in 1980, leading the computerisation of the service in the 80s and 90s before becoming Chief Librarian in 2014.

As Laura prepared to stroll off into the sunset, she sat down with Head of Marketing & Customer Services Adam Bayfield to talk about what the Library was like when she started and how it’s changed, her strategy as Chief Librarian, and how she sees the Library’s future.

Adam: When did you first start working at the Library?

Laura: I remember it well – it was August 1980. I was doing my postgraduate library diploma at Loughborough University. I can remember all my friends saying, have you seen this job in Guernsey? It was being advertised in the Times Literary Supplement. They were recruiting for a librarian, and they wanted someone with a knowledge of French because of the local books. Everyone was talking about it, and I thought, maybe I’ll apply for that – I knew French, and it would certainly be something different.

I came over for an interview in June and it was thick fog. I had no idea where I was going, but somehow I ended up in Market Square. I walked up to the Library entrance to find a man on the doorstep, peering out into the fog. It turned out to be Eric Stevens, the Chief Librarian. He showed me around the Library and honestly, it was surreal. It was like something out of a Dickens novel – it was dusty, and there were piles of old books everywhere. The enquiry desk was this big, enormous thing in the Assembly Room on the first floor, and the Entrance Hall was just this big, cold, empty space. It was like nothing I’d ever experienced before, it was completely bizarre. And it was so exciting.

He showed me around the Library and honestly, it was surreal. It was like something out of a Dickens novel.

What was happening in the Library at that time?

It was quite a big moment in the Library’s history, because the States had just agreed to provide an annual grant to make the service free for the community – before that, it had been a subscription service. I think it was £2.50 for the year. There had also just been a big donation from Sir Charles Hayward, a businessman who lived on Jethou at the time, to fund a refurbishment and redevelopment of the building.

When I arrived, the construction work had just started, and lots of things were changing, including the addition of the gallery in the Hayward Room. It was very exciting to me because it was like creating a library from scratch.

I was just so charmed by the whole thing, and I really wanted the job! Even more so when Eric took me for a drive around the island after the interview – by then the fog had cleared and the sun had come out, and I thought, sunshine, beaches…this is the job for me. Luckily, they gave it to me!

What was your job title when you first started?

I was an Assistant Librarian. There were only about ten staff then – one of whom is still here today!

I was a stock librarian, working with non-fiction books, and I was also put in charge of local studies – which, having just arrived from the mainland, was a challenge! Fortunately, the other members of staff were brilliant, and helped me get to grips with it.

To begin with, most of my time was spent shifting old books and boxes of newspapers from one room to another as the builders moved from room to room. I used to get absolutely covered in dust and grime every day. It was fascinating – I just loved it. Every day was different. It was just really good fun.

You did that for a few years, and then you left the Library for a time?

That’s right, I left for a couple of years. I thought I needed to expand my horizons. But I just really missed it. I realised that it wasn’t normal at the Guille-Allès Library, and it was much more interesting than being in the normal world!

Luckily, a vacancy arose again in 1987, and I interviewed again and they gave me the job. By then we had more librarians and we were moving into computerisation. That was incredibly exciting. My job was to run the project to move from the old system to the fully computerised system.

It was ground-breaking stuff – it seems quaint to think about now, but what we were doing was genuinely at the cutting edge of computer technology at the time. I was the only person in Guernsey using Unix. I remember our IT support company being very impressed! That project was really good fun, and it kept me extremely busy all the way through the end of the eighties and most of the nineties. 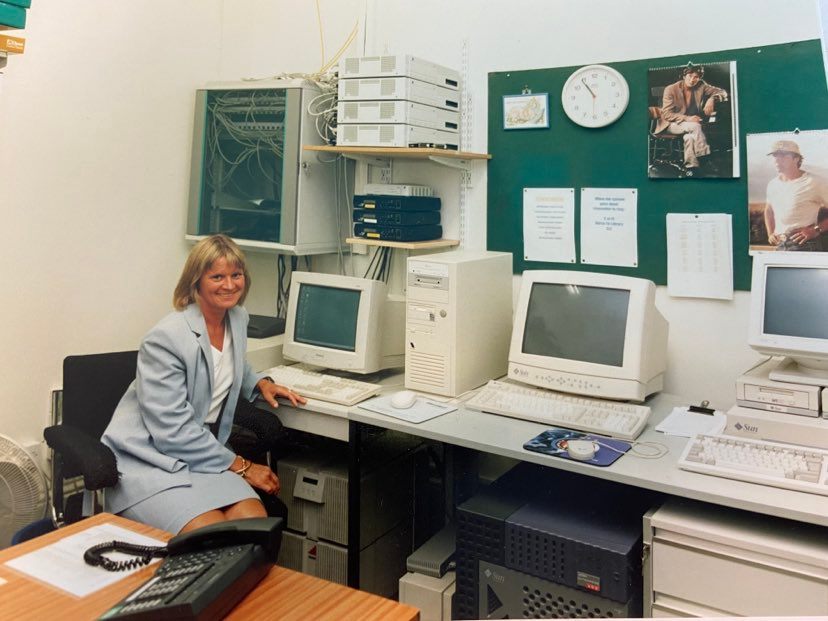 Laura led the computerisation of the library service in the 1980s and 90s. Here she is in her element, in our Systems Room in 1995.

Skipping forward a few years, you took over as Chief Librarian in 2014. I think it’s fair to say that the service has changed and developed a lot on your watch. Can you talk about what your strategy has been?

I was very keen to ensure that we keep moving with the times. While the traditional library service was great, it was so important that we keep moving on, and evolve beyond the traditional image of the Library. My aim was to work really hard on that, to boost the digital side with things like eBooks and the Fab Lab, and also try to free everything up – to remove barriers to access and make the Library as easy to use as possible. We’ve done that by abolishing fines and removing unnecessary rules, building connections with other organisations and external partners, and by consciously trying to turn the Library into something more like a community hub.

I do feel we’ve had some success in that regard. Yes, we’re a library and we’ll always be about books, but we’re embracing new ideas. And if you look at Mr Guille and Mr Allès’s original thinking, that’s what they always had in mind – they wanted the Library to be a place of creativity and learning, and to always be moving with the times. A place where people can learn and be inspired. A place to be.

So that was my strategy!

What have been the highlights of your time as Chief Librarian?

There have been lots of individual moments, but overall I suppose it’s just to be able to look back and see how we’ve developed – that trajectory of moving with the times. I’m really proud, because we’ve been given the opportunity to develop a library service on this island that’s not so common these days. We’ve evolved with things like eBooks and the digital collection, but we’ve still kept the rest of it relevant, and that shows in our membership numbers rising above 16,000, which was one of my ambitions when I took over.

I’m proud that we’ve made the Library a place that people want to come to. I just love when I’m walking around Town, and I hear children say, ‘can we go to the library now, mum?’ It really lifts my heart when I hear that.

I’m proud that we’ve made the Library a place that people want to come to. I just love when I’m walking around Town, and I hear children say, ‘can we go to the library now, mum?’ It really lifts my heart when I hear that.

As you step into retirement, how do you see the future of the Library?

I think it’s going to be fantastic. It’s not going to slow down, because there’s always something new, and things can always be made better. I think the strategy and building blocks are there, and we’ve got a fantastic management team, and a huge array of talent across the staff – I expect you all to do great things!

I feel like that’s my legacy – I’ve hopefully put the pieces in place for you guys to build on. I always knew I wasn’t going to be in this post for a long time. I’m so glad that I got to do it, because I didn’t think I ever would. I enjoyed my whole career, but this has been the best part. It was great to have the opportunity, and to be able to deliver on what I had in my mind – which was to get the right people in post, and give them the freedom and encouragement to try things, to run with new ideas.

So I know the Library will continue to flourish, because I know how good my team are.

What are you going to miss?

I’ve thought about this a lot. It’s been so much a part of life. I’ve been working here for almost forty years! Above all, I’ll miss being involved. I’m looking forward to not having to get up in the morning, not having to turn out in the rain – but as soon as we get to talking about plans for the future, I get really excited, and I have to stop myself and remember that I’m not going to be here! That’s what I’ll miss. But I promise I won’t interfere!

I’m sure we’ll always welcome your input! Because we’re certainly going to miss you, Laura.

Thank you. I’ll miss you all, too. That’s what I’ll really miss. Interacting with a great group of people. 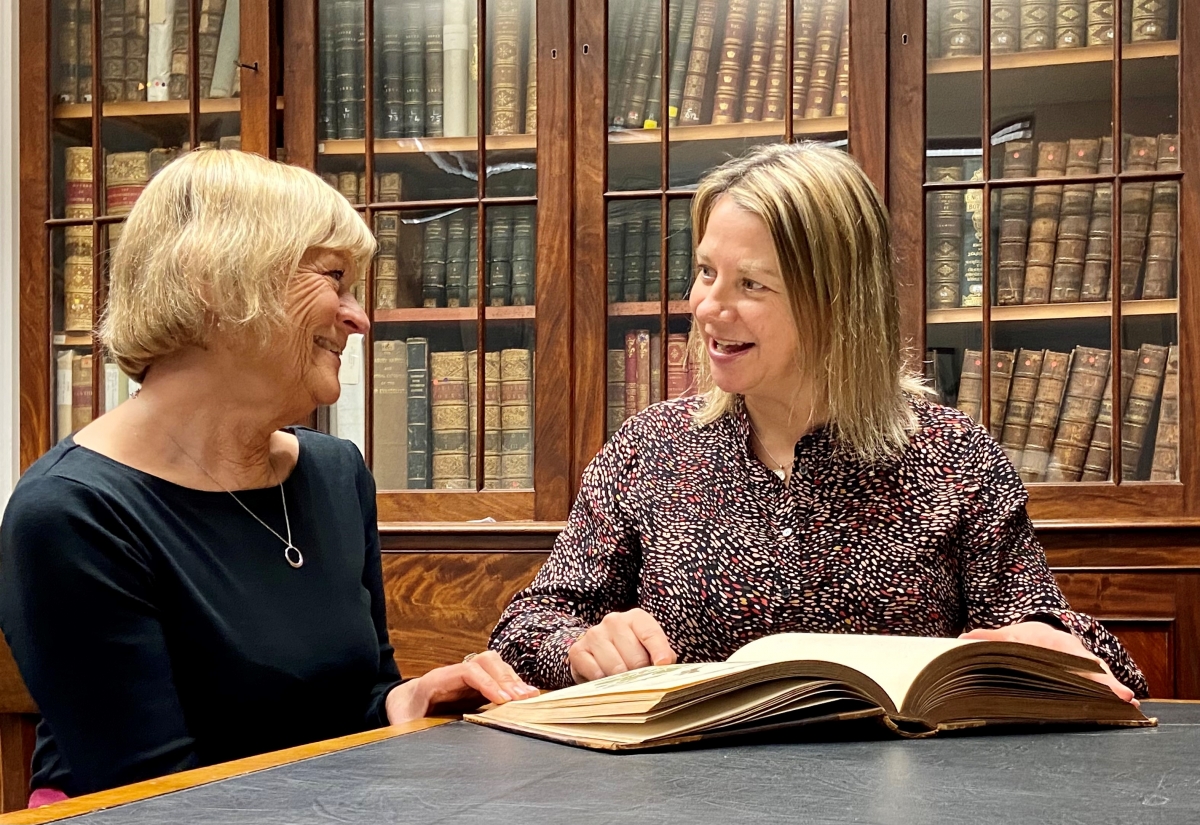 Laura with her successor, our new Chief Librarian Cornelia James.