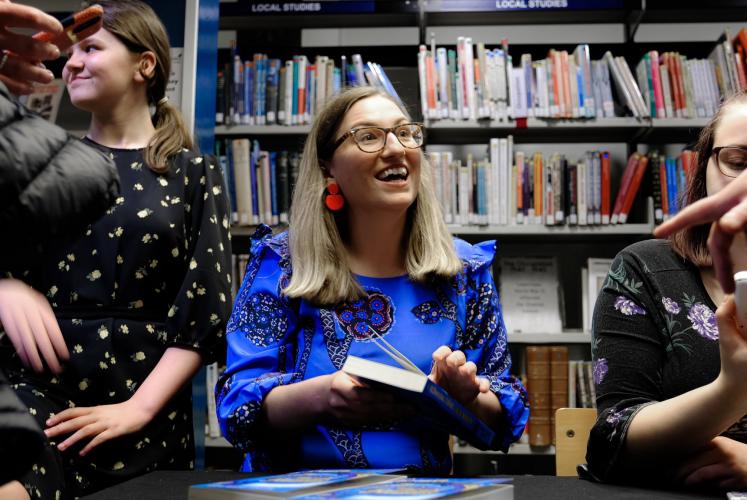 We're delighted to present this guest blog from Guernsey-born writer Kate Gilby Smith, author of 'The Astonishing Future of Alex Nobody'.

Kate spoke at the Library in May 2021 in a fantastic event at the Guernsey Literary Festival.

Inspiration for stories can come from anywhere. The inspiration for my children’s book The Astonishing Future of Alex Nobody came when I was sitting at the back of a university lecture about the philosophy of time travel. While I should have been diligently scribbling down notes, instead I was thinking about what I would do if I could travel back in time.

Where and when would I go? And more importantly, who would I like to meet?

Soon I was planning a trip to visit Albert Einstein. I was packing my bags for a holiday in Ancient Egypt to meet Cleopatra. And I was asking myself whether or not Jane Austen would let me take a selfie with her. Then, having indulged my imagination for a little while, something occurred to me. How strange it would be for Albert Einstein, or Cleopatra, or Jane Austen, to have me turn up out the blue from the future. It would be even stranger still, I realised, if they hadn’t yet done any of the astonishing things that they went on to do, because when I showed up – autograph book in hand – they were still only a child.

This was how the idea came to me for Alex Nobody: a twelve-year-old girl who discovers that people (or time tourists) are travelling back in time to meet her because one day in the future she becomes famous. The only problem is, she has absolutely no idea what she becomes famous for.

Soon I was planning a trip to visit Albert Einstein. I was packing my bags for a holiday in Ancient Egypt to meet Cleopatra. And I was asking myself whether or not Jane Austen would let me take a selfie with her.

As it turned out, having the idea for the book was the easy part. It took a long time and lots of hard work to complete a draft manuscript. Along the way, I learned a few lessons about writing. Here, I’d like to share some of those lessons with you. Whether you’re writing stories for school, dream of writing your first novel, or are working on any other kind of creative writing, I do hope these five tips will help.

1. Find inspiration in the world around you

An idea for a story might be sparked by something you hear on the radio. Or by something you read in a magazine or a book, or by a lesson at school, or by a conversation you overhear in the supermarket. A writer needs to always keep their ears and eyes out for inspiration. Reading as much as possible will really help your writing, but don’t only choose fiction. I find inspiration reading books or watching shows about science, history, philosophy and more. Learning more about the world around you can spark great ideas.

A good way to develop ideas for stories is to ask yourself: what if? What would happen if I travelled back in time to meet Jane Austen? What would happen if she was only a child when I met her? Asking yourself ‘what if’ questions can lead you to interesting scenarios and ideas, and that’s exactly where stories begin! For example, you might hear on the news about plans to send the first ever astronaut to Mars on a solo mission. You might then ask yourself, what would it be like if I flew to Mars? How would I feel being the first person there? Would I be scared being on my own? Then you could throw in another ‘what if’ – and this time make it a huge curveball. What if you came across footprints… or a house? What if you realised you weren’t as alone on Mars as you’d thought? Then you have yourself the beginnings of a story – what’s called a premise. After that, you need to keep asking yourself question after question (who is your central character? What are they like? Who do the footprints belong to?) until your premise develops into story.

What would it be like if I flew to Mars? How would I feel being the first person there? Would I be scared being on my own?

3. Write profiles for your characters

In great stories the characters seem like real, living, breathing people. A good way to achieve this is to write character profiles before you start your story. Ask yourself loads of questions about your main character. What’s their name? What’s their favourite food? How old are they? How would their friends describe them? What frightens them? What do they want more than anything else in the world? You don’t have to mention everything you come up with in the story itself but taking the time to get to know your characters will make them seem interesting and believable.

Ask yourself loads of questions about your main character. What's their name? What's their favourite food? How old are they?

4. Think carefully about where to start

Once you’ve got an idea you’re excited by, and you’ve thought lots about your characters, you’ll need to decide where to start your story. This is another important part of the writing process. Take the idea I outlined above about the astronaut travelling to Mars as an example. Where would you decide to start that story? You might think about starting the story on the day the astronaut is born, for example. Or you might start the story from the moment the astronaut receives their mission to go to Mars. Or you might start the story during the astronaut’s rocky landing on Mars. As the writer, it’s totally your choice. But my advice is this: start as close to the main action of the story as you possibly can. Don’t waste a second of the reader’s time. Ask yourself: is it important for the reader to see this part? Do they need to read about the day the astronaut was born? Would the story make sense if it started later on?

My advice is this: start as close to the main action of the story as you possibly can. Don't waste a second of the reader's time.

5. The first draft doesn’t have to be the final draft

Lots of writers are perfectionists. And that can be a good and bad thing. Sometimes words come out on the page just how you want them the first time. And other times you’ll want to write, and then rewrite, and rewrite, until you’re happy. Don’t be too hard on yourself if at first the story isn’t exactly as you want it to be. Remember that the first draft doesn’t have to be the final draft. Until you write ‘THE END’ and declare the story finished you can keep editing and improving it as long as you like. You won’t find a single book or short story in the library that’s the author’s first draft! So don’t compare your first, or second or third draft with somebody else’s finished work.

Until you write 'THE END' and declare the story finished you can keep editing and improving it as long as you like.

Kate Gilby Smith was born and grew up on Guernsey. It was while daydreaming during a philosophy of time travel seminar at The University of Edinburgh that she first had the idea for her debut book, The Astonishing Future of Alex Nobody, which was published by Hachette in June 2021.

In 2015 she moved to London where she works as a publicist for science, philosophy and history books. Her writing for children is inspired by her love of all three of these topics. When not writing, her favourite things are basketball, swimming in the sea and eating ice cream.